Its been awhile since my last post, but my little family and I have been through a lot this past year or two. We’ve battled cancer, started school, moved once or twice, and finally settled into our new life at home with more family, friends and support than we ever imagined. God IS Good!!

This year my daughter, who we fondly nicknamed Bluebird, is turning the BIG THREE!! She’s had to travel a lot in her young age and likes to be close to home with friends and family. To be able to share her birthday with her class– that is a super special opportunity! Chris and I brainstormed a lot of different ideas. What character is popular or trendy with Preschoolers? This led to a wealth of various characters. No luck there! Then, we thought about what would reinforce her classroom teacher’s curriculum. They are studying Eric Carle’s “Brown Bear, Brown Bear.” Bluebird is on a heavy bear kick due to this. Hmmm….

The answer? A Teddy Bear Picnic, of course! We felt it was the perfect theme….classic, timeless, fun and educational. We began to plan a snack, craft, story, and favor. 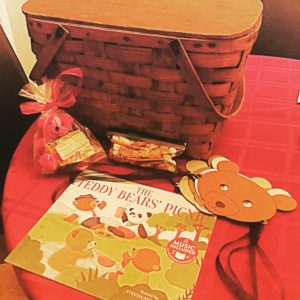 I immediately ordered the Sing-A-Long book, Teddy Bears’ Picnic, from Amazon.com. This would be the story Chris reads during storytime. I was a little nervous about Chris going –being a Dad and not having much interaction with a GROUP of preschoolers; but it was actually the best thing we could’ve done! It turns out two other mothers read for their children’s birthday earlier that week and Chris was a refreshing masculine change. The little boys in Bluebird’s class were thrilled and Bluebird was so proud of her Daddy!

We also brought an old fashioned wooden picnic basket, so the children could see what one looked like. It was great for storing favors, etc. The kids wouldn’t stop talking about it. “What is it? What’s inside it?” and more questions were heard during circle time. When I brought the idea up to Chris, he said, “You don’t think they know what a picnic basket is?” I said, “No, most kids nowadays don’t know what a landline, corded telephone is, so why would they know what a picnic basket is? Their parents probably have a wine cooler or Yeti!” Chris admitted I had a point and it definitely peaked the children’s interest. This particular basket dates back to the early sixties from my Mom’s childhood days.

Next, I wanted to secure the favors. Since we decided Miniature Teddy Bears were ideal for children to take home and use to pretend in having their own Teddy Bear Picnic, we ordered 2 dozen Fun Express Primary Plush Bears from Amazon for $11.39 a dozen. Bluebird’s party was in early November, so we capitalized on the Halloween candy clearance and bought several bags of miniature Haribo Gummy Bears. Later, I went to Micheal’s and purchased Wilton Treat Bags and red ribbon to give the bear favors a clean, festive look. I used labels I had laying around the house and wrote “Thank you for making my day beary special!” on them. 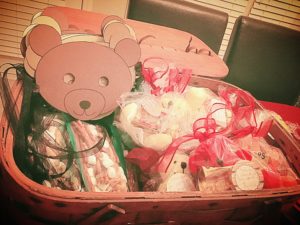 I found this printable bear mask on Woo! Jr for the children to wear and play in. We used various shades of brown cardstock and black ribbon from Micheal’s to make the masks. They were more fun and imaginative than plain party hats.

The snack was the last concern. Bluebird’s school is somewhat health conscious and her teacher encourages sweet and salty snacks. So I fixed a Teddy Bear Snack Mix. The recipe is as follows: 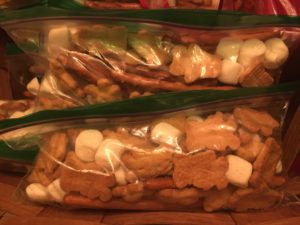 Mix ingredients together in a large bowl and serve in snack size Ziploc bags.

The children enjoyed the snack mix. I also admit that I learned not to be alarmed when the preschoolers decided to stab the marshmallows with their pretzel sticks. (More fun time and learning tactile skills and opposites of soft versus hard! And they did it all by themselves!) It was a bit unexpected, but I suppose we had a snack and a craft! Ha! Everyone had a great time and Bluebird really enjoyed sharing her special day with the class. It meant a lot to us, as parents, to provide for her special day and to have the opportunity to interact with her class. I hope this inspires you to get creative and have fun! With many birthdays being at fun off-site centers, the “old-fashioned” on-site party with storytime, crafts, snacks, and play charmed the two-three year olds!