Potatoes are an important part of Irish history. For much of the Irish population, potatoes were the main dietary staple. They grew easily and therefore, potatoes became one of the main crops of Ireland. Many popular dishes include potatoes, such as Colcannon, Boxtys, and, of course, Potato Soup!

As St. Patrick’s Day nears, I tend to indulge in traditional Irish cuisine and my own family history. (I am a Hylander, after all!) My husband’s grandparents were Irish immigrants. When we were engaged, he showed me a picture some might take for granted. They were young, plainly dressed and standing on a huge hill next to a railroad track. With wide eyes and huge smiles, they look very excited to be there. He explained it was the day his grandfather reached San Francisco while working on the railroad. Anyone who has studied how the railroad was built or at least watched an episode of “Hell on Wheels” knows that life on the railroad was difficult, especially for Irish immigrants. I realized what an accomplishment it was for them to reach San Francisco and became even more grateful for what I have today. Around St. Patrick’s Day, we try to remember our ancestors, what they’ve built for us, and how they influence us today.

Whether you have Irish ancestry or simply love to celebrate St. Patrick’s Day, enjoy some of the traditional fare. Look for recipes coming up right here on Southern Simmering! 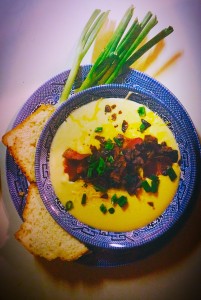 In a large stockpot, boil potatoes, celery, carrots and garlic in beef broth until vegetables are tender.  Remove soup from stove and blend soup with a stick-style immersion blender. Place soup back on the stovetop and reduce heat. Add Sonny’s seasoning salt, pepper, salt, red pepper, and minced garlic and simmer on low heat or for slow cooking, add to your crockpot. Add two blocks of cream cheese and emulsify again with blender until all ingredients are combined.  Serve hot with toppings of cheese, scallions, and bacon bits.  Store in the refrigerator for up to 3 days or freeze for up to 3 months in an air tight container. Enjoy!